Becoming the Parent to my Parents

It’s been a crazy week in my world. I am custodian to my elderly parents. My dad has advanced Alzheimer’s and my mom has Parkinson’s. Both have had strokes and are at risk of falling. They still live alone in their home, with assistance… me.

I was visiting them every other day to clean and bring groceries, pharmaceuticals and assorted oddities. I’ve been slowing cleaning out their house, one drawer at a time. I sneak junk out in the trash, like broken sunglasses, ratty throw pillows and  dumbells.

Since my sister went to Japan to join her family, my solo routine had been working… and then all hell broke loose. Last week, my father escaped for the second time this year. In April, he slipped out before my mom woke up and got a few blocks away. He had fallen and an kind stranger called 911. We were all reunited at the ER. He was bloody, bruised and shaken. That’s when reality set in.

Fast forward to last week… my mom called, frantic, to say he was missing again. She thought he was in the bathroom, but she naps on the couch so he slipped out with no problem.  Ten minutes after reporting him missing with the Vallejo Police department, he was found safe. By the time I got to the house, the police were on their way to return him. Note: I was impressed by the speed of the Vallejo Police, they even dispatched a helicopter to look for him.

I was just getting a grasp of the seriousness of my dad’s condition, when my mom made her move… she had fallen. It was the call I was dreading. She has severe arthritis so she uses a walker. It was just a matter of time.

Again, I rushed over. I carefully loaded them both into my truck and headed to Kaiser. We spent the day there, with her doctor, doing lab work and waiting. We returned the next day for more labs and a CT scan, no easy task with the two of them. I can’t turn my back on my dad because he’ll take off, and I can’t leave my mom to walk on her own, I wheel her on her walker. It was a like a Turtle Circus.

So now I am camped out at the parent-farm every night. It’s like having full-grown two toddlers who can open doors, eat non-stop and drop food on the floor. I am constantly cleaning, doing laundry, emptying trash cans, changing bedsheets and mopping goop off the floor. I shop for them every other day, only microwavable foods. I can’t trust them to use the stove as there have been several smoke alarm incidents.

I had just left the house for 30 minutes last night, when my mom fell again. She calls me every hour when I’m away, but I never know when it’s going to be a serious call, or just an order for bananas.

Nights here are the worst. Alzheimer’s patients are prone to wander at night. My dad gets up to use the bathroom at least 6 times a night, then heads for the front door. He always says he’s going home. I finally changed the locks so we can lock the front door with a key from the inside.

Worse yet, my mom is now getting up at all hours… toddling the hallway with her walker at 2am, risking another fall for a glass of water. Attempting to keep her in bed, I gave her a bell so I could get her what she needs. Now that damn bell rings every hour or so, all night. I slept a full 2 hours last night. It’s like having a newborn.

I’m shopping for a wheelchair and working on getting my dad into an Alzheimer’s care facility, no easy task. It’s $6,000 a month if he doesn’t qualify for Medical. Kaiser will only pay for his care if he requires medical attention regularly… talk about red tape. I have a mountain of research to do.

Just FYI… having power of attorney just means you have more responsibility. I’m taking over their affairs. The hardest part is… they still tell me how to do things, as if I don’t know what I’m doing, not to mention the back-seat driving. I feel like a 44-year old Cinderella without any hope of Prince Charming saving me. 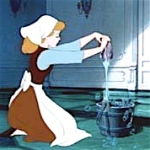 So here is the question; if I am caring for my parents, is it okay to act like a parent? Last night, I threatened to take my mom’s walker away if she got out of bed again. This morning I insisted my dad take a shower and stood outside the door telling him to use soap. When I brought them dinner tonight, I watched them eat like wolverines, reminding them to please use forks.

What is happening here? My son, the Biscuit is ten so he’s pretty self-sufficient. I thought my days of dealing with pee-pee accidents was over. Boy was I wrong. I’m getting through this with a sense of humor… and perfectly timed cocktails.

This entry was posted in Uncategorized. Bookmark the permalink.

2 responses to “Becoming the Parent to my Parents”